Second is storage stability. Many factors determine the extent to which fuel degrades in storage, including exposure to heat and oxygen, moisture and the degree to which the fuel is treated with cetane improvers.

The proprietary anti-oxidant package of Newport-DSL prevents fuel from degrading even under the most extreme storage conditions. Ignition quality is uncompromised. Fuel remains viable not just for months, but for many years in storage. 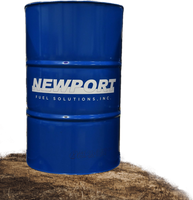